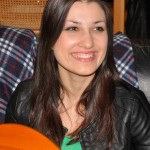 It was just after New Year’s Eve that David proposed. Indeed, he did so in English. The only two words he knew in Russian were “da” and “babushka.” Yet, I am lucky to have such an understanding and loving husband who knows how important my Ukrainian roots and my family in the town of Zaporizhzhya (Ukraine) are to me. Thus, as part of his proposal he vowed to write a letter to my Dad in Russian asking him for my hand. Spurred on by one of the happiest moments in my life, I said “yes!”

A couple of days after we officially announced our engagement to our friends, David swore to learn Russian and converse with my family via Skype in two weeks. He never mentioned exactly when he would start learning the language though.

And so, in February, a month after our engagement, with the help of some self-study materials, David’s vocabulary had only become enriched by the word “net” and some terms concerning female body parts. Needless to say, my father, who was educated in the USSR, would have little to no tolerance for any letter addressed to him containing the vocabulary my fiancé possessed. I loved my fiancé and I married him regardless of his language abilities or overwhelming pride about being an American.

The same month our marriage became official, we learned about the impatient baby who would be entering our lives in the very near future. Though extremely overwhelmed and in need of a drink, we both accepted the event as one of pure happiness that had been granted to us by the Universe. It was then that I realized it was time to travel to Ukraine before the due date. David acquiesced. I felt like a combative feminist stressing that a man needs to do this and that. “Find a language course in Chicago and learn it,” “Instead of relaxing after work, why don’t you spend an hour listening to Russian?” or “Why don’t you go to a Russian class if you can’t do it at home?!” Blackmail was the last resort in my arsenal: “I will only speak Russian to our son, and no English. If one day you don’t understand what he is saying – don’t ask me for translations.” I felt a little desperate and hopeless, and disliked being so tough and unfair to my hard-working husband. These were rather pushy techniques, but they achieved the desired result.

I had heard that Ksenia Kologrieva was the best Russian tutor in the Chicago area. She graduated from Moscow State University’s Philology Department, and this alone was enough to consider her services. On top of her education, Ksenia turned out to have a fantastic personality, and her brainchild Cloudberry Language School just happened to be close to where we live (Old Town in Chicago). David felt confident about Ksenia. Unlike other teachers he had worked with, she made him feel at ease and was not judgmental, but always supportive and inspiring. I also figured she was an effective teacher because after each class David would come home and greet me with “Ti – krasivaya zhena” (“You are a beautiful wife”) or “Ya tebia lublu” (“I love you”). Once he waited even longer and after supper surprised me by exclaiming “vkusno!” (“delicious!”).

David took one to two Russian classes per week for less than a month before we departed from O’Hare and landed in Boryspil, Kiev some 15 hours later. He knew how to greet my family and friends, was able to talk about his background (“Menya zovut David, u menya est brat”) (“My name is David, I have a brother”), ask for basic help (“Gde tualet?”) (“Where is the restroom?”), and order food in a restaurant (“Pivo pojalujsta”) (“I’ll have a beer please”).

Everyone was absolutely charmed by David and his attempts to learn Russian. During the trip he spent some time going over the books and outlines from Ksenia’s classes. At our Ukrainian wedding dinner he was upset about something and said “Pipets” (“Dammit”) in an absolutely serious manner, which transformed a rather calm and peaceful dinner into an outburst of laughter.

In late June, six months after our engagement, my Dad had yet to receive a letter from David. However, he approved of my choice as a life partner because one would have to be blind not to notice Dave’s efforts to make me happy. Perhaps he was not perfect with all of his promises, but in the end, who is? He managed to make all my feminist mottos melt away and my heart beat faster by saying in the most sincere way: “I feel so sorry, Anna. I feel embarrassed for not having learned the language your family speaks. Now I understand what it means.” He promised his Russian language skills would be much improved for the next year trip. This time I know he has started making good on his promise right away.