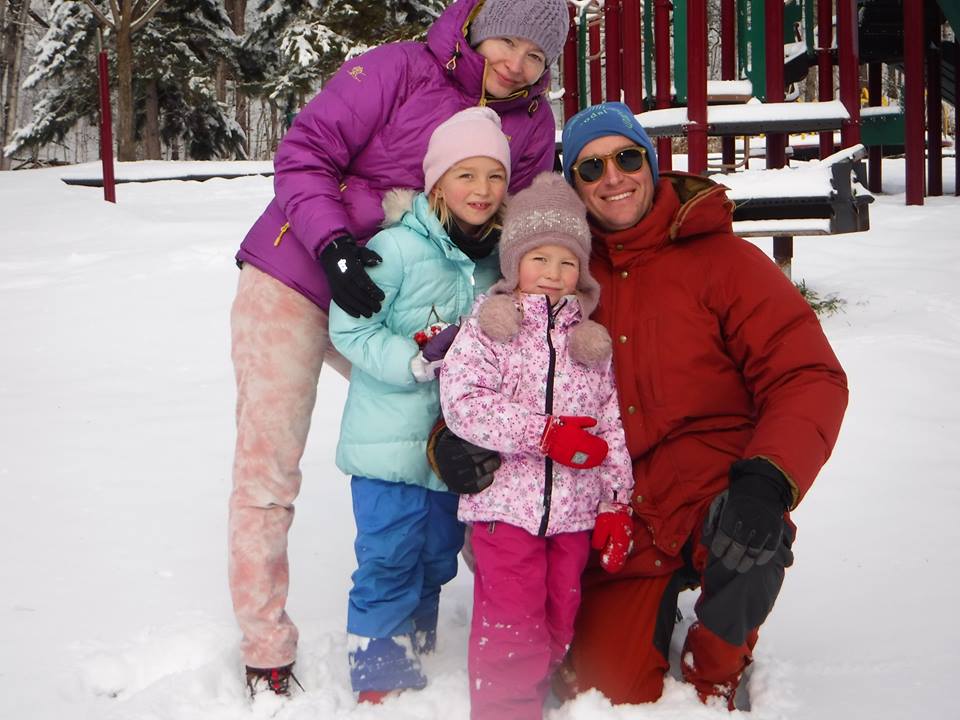 Chris and his family

Raising two bi-lingual daughters has been an interesting and rewarding challenge for our family. My wife is Russian, and we met in St. Petersburg, and spoke mainly Russian together during the 14 years that I lived there. Our daughters, Vanessa and Adriana, were also born in St. Petersburg, and accordingly spent the first years of their lives in a Russian-speaking environment. Vanessa, our oldest daughter, even had the opportunity to attend a pre-school in St. Petersburg for a year.

In the spring of 2014, however, my wife was accepted to graduate school in the United States, and so we moved to Minnesota in July of that year. At that point Vanessa was 4 years and 2 months old, while Adriana was 2 years and 3 months old.

It’s worth mentioning that Vanessa had lived in America before for a period of 6 months when she was a baby while my wife was fulfilling her Green Card requirement. Adriana also had several periods living in America for a few months at a time while she was a baby. The girls had always had both Russian and American culture in their lives, and also travelled quite a bit in Europe during their first years.

Our transition to American life went quite smoothly for the girls (not so smoothly for me, searching for a job that would use my Russian skills in Duluth, MN). I spent our first year in the US at home with the girls, taking Vanessa to Head Start (a federal public pre-school program, in English) 4 days a week, as well as to speech therapy appointments (in English) 3 times a week. Adriana was not yet three years old during our first year in the US, and she and Vanessa and I spent our days together while my wife was in full-time graduate school (Adriana mostly took naps, as I remember). During this transition year, we mainly spoke Russian in the house, and English outside the house. Adriana was just learning to speak, and made quick progress in both Russian and English.

Then in our second year in the US, everything changed. Vanessa started full-time public kindergarten (she went to an Ojibwe immersion kindergarten, the only one of its kind offered in a public school in the entire United States), while Adriana began attending a private American pre-school where there were only English speaking children. These two events dramatically changed our children’s language preferences from Russian to English. The kids were playing with their peers in English-speaking settings each day (Ojibwe also became a small part of our lives), and Vanessa and Adriana naturally drifted towards English for their own play and speech at home. Furthermore, we are very social people, and go to lots of public events with the girls, so the girls are exposed to English constantly outside of school as well.

It came as quite a disappointment to my wife to find her kids using English as the dominant language in the house. At times, it felt like a losing battle trying to keep the girls using Russian. But we’ve found that persistence and determination are the keys to keeping the girl’s Russian alive. My wife and I have worked had to combat the English trend in our girls’ lives by using Russian as much as possible at home. In fact my wife speaks to the girls only in Russian (let’s say 95% of the time) to this day, while I use Russian with them as often as I can remind myself to use it (let’s say 30% of the time). Thus, while we could see Russian losing out in a big way to English when the girls both started school, we didn’t give up.

Today, Russian is making a comeback in our kids’ lives. I believe this is primarily a factor of them growing up more and becoming better able to focus on purposely using the language when we ask them to. They know very well that we want them to use Russian, and that we are doing our best to give them opportunities to use Russian at home, and I believe the girls are responding to our requests and demands, making a conscious effort to use the language. This has happened since Vanessa turned six, and Adriana turned five. There are times when the girls even play together in Russian now, when we’re not watching over them. Of course they still use English the majority of the time, but their Russian is active as well.

Here are some of the situations that have made this gradual return to Russian possible:

2. We take a lot of weekend trips together just the four of us, mainly ski trips in the winter and wilderness camping trips in the summer, where the girls are constantly with us. We use Russian constantly during these trips, giving the girls a lot of exposure to the language. It’s funny, but cutting the girls (and ourselves) off from society produces good results in their Russian use. We also use Russian with the kids when we’re in the real world, but going out in society inevitably leads to conversation with friends in English.

3. We have never given up reading fairy tales and bedtime stories to the girls in Russian, even now that Vanessa brings homework (mainly reading assignments) to be done in English.

4. We like putting on Russian music for the girls. We play them children’s music, but also more adult music as well. Interestingly, they have become big fans of Zemfira, and can sing some of her songs in Russian by heart.

5. We occasionally watch Russian music videos on the computer together with the girls, which they often really like.

6. We have card games and other board games for the girls that are in Russian. We try to play these regularly.

7. My mother, thankfully, told my wife and me long ago that she likes not being able to understand us when we speak Russian together. She says its less stress for her when she doesn’t have to be involved in our family feuds. She is also fine with us speaking to the girls in Russian in front of her, for the same reasons. My father has a great respect for Russian people and Russian language, and generally encourages us to use Russian with the girls.

8. We never force the girls to speak in Russian. We feel it should come naturally, from our example. While it is upsetting sometimes when the girls don’t use Russian as much as we would like, we don’t get angry with them over it. We feel we still have plenty of time to teach them Russian. It can’t happen in a snap. It’s a long process.

We have also taken some basic steps to familiarize our children with writing Russian letters and learning to read the Russian alphabet. They still have a long ways to go to be able to read and write in Russian. As for my wicked American accent in Russian, the girls have been blessed not to pick that up from me. They’re lucky!

Another factor which I personally believe has helped the girls learn Russian is that we don’t have a TV at home. Maybe the connection between the absence of television and learning a second language isn’t obvious to most, but to me the connection is the following: by not having a TV in the house, the girls are forced to play together more often. The only people the girls speak Russian to are their mother, their father, and each other. By giving them ample time to invent their own games and play together, I think it forces them to use language actively. Since some of this play is in Russian (about 25% of the time at present), that is additional time the girls gain speaking the language. While I know that some would argue that watching TV is a passive way for kids to acquire a second language, I’m not buying it. I think kids need to really use the second language themselves. Playing together encourages this.

In summary, the biggest factors supporting the girls’ Russian are that we work hard to keep Russian alive in our family life, we don’t let the girls get absorbed in English screen time, and the girls have each other to play with in Russian. Other than each other, the girls don’t have any Russian-speaking friends, so it’s up to my wife and I to do all the work to get them to use Russian.

We have one other thing on our side as well: we continue to take the girls back to Russia for some time each summer. They went back for 1 month in 2015, for 1 month in 2016, and will be back for 2 weeks this summer. While not much time, this at least keeps Russia and the language alive for the girls, and we are counting on them to put more of their own effort in to using the language as they mature, in part thanks to these inspiring trips.

We’ve survived the initial bleak period of English dominance, and have managed to establish a viable Russian response. Our advice to all parents is to keep at it, and don’t give up! You are the example your kids will follow. Everything is in your hands. As we all know, children learn by copying their parents, and it has been our great advantage that my wife and I speak Russian together. While I don’t know what it would be like raising children whose mother’s language I can’t speak, I think the same general rules apply to these parents too – encourage your kids to use their second language, give them exposure to it, foster it. Even if you don’t speak the language yourself, you’ll be happy down the road when your kids do.

My wife and I are going to play this second language card for the rest of our lives, as long as it takes to get our girls to use Russian too.